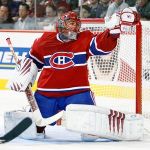 As I was driving to the office this morning, I was still lamenting last night’s Washington Capitals playoff game in which they lost 4-1.  For those of you who are not sports or hockey fans, my Caps dominated the regular season.  They are the #1 seed in the playoffs and were expected to dominate the Montreal Canadians.  The Caps won 3 of the first 4 games as expected and where only 1 win away from advancing to the next round….they had all the momentum.  However, that’s when things began to change…

Montreal goal-tender, Jaroslav Halak began playing out of his mind.  He had been so bad earlier in the series that he actually got replaced by the back-up goalie, but in Game 5, he held the high scoring Caps team to just one goal.  Then last night, in the first few minutes he made 3 spectacular saves that gave he and his team the confidence they needed to sustain the momentum they had started in the previous game.  By the time the game was over, Halak has stopped an incredible 53 of 54 shots taken at him.  To put that in context…if a team gets off 35 shots in a game it’s considered a lot…or another way to think about it is…a Hall of Fame goalie over his career will stop 50 out of every 54 shots taken at him.

Ok, so here are some random thoughts of what to make of the above….

So let’s hear from you…what lessons have you learned about momentum?  And oh yeah…Let’s Go Caps in game 7 tomorrow night!